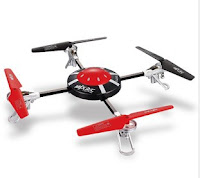 For aerial cinematography, think of the Helicam as a hybrid dolly and jib with an insane range of motion. Since the helicopter is not connected to the ground it can move the camera freely to any point in 3 dimensional space, providing some unique and often spectacular angles, movements and views. These aircraft are most often flown in what is commonly known as "line of sight" or LOS. For a larger, brightly colored helicopter, this range can be as much as 900 feet in the horizontal plane and 400 feet vertically when operated by a well experienced pilot. Why is the vertical distance less than the horizontal you might ask? Well this is primarily due to the policies of the FAA in the United States. It is in everyone's best interest if these unmanned aircraft do not try to occupy the same airspace, at the same time, as full size manned aircraft.

From a creative perspective, the potential of such a device quickly becomes apparent. The next question is usually one of image quality. Capturing photographs from a helicam is not a overly simple task for a competent pilot, but capturing smooth, stable film or video is an entirely different matter and requires the skill set of a true ninja/guru/master in several different arenas. This quickly explains why there is truly only a handful of companies that can consistently and reliably provide such a service. For these elite few, it is possible to provide very high quality imagery that is worthy of the big screen.

There are a variety of helicopter types and sizes used for HD aerial video and film-making. They can be powered by internal combustion engines, turbine engines and electric motors. Our personal experience has shown that turbine powered models, while smooth, are overly complex and not practical for daily use "in the trenches". Electric powered models are both smooth and quiet but have limited flight duration. Around 10 minutes flight time is typical for one set of lithium based batteries. Since aerial shots are typically short, this is usually not an issue and only a few moments are required to change batteries. Internal combustion powered models may be either methanol or gasoline powered.

Once again, our personal experience has been that opposed twin cylinder engines are much smoother than single cylinder types. We have been able to obtain smooth, vibration free video from such platforms that rivals our electric powered models. A side benefit of these platforms is the ability to be continuously available for up to one hour. These platforms are also larger than current electric powered aircraft and so, are more stable, particularly in moderate winds. (This is not just our opinion, it is the law. More specifically Newton's law).

For HD video, the practical benefit of gas power is being able to do multiple takes, land and idle, quickly confer and make changes in direction for a given shot, take off and immediately continue filming. Over the course of a day of filming this can be a huge time savings. For 35mm filming this is less important as the cameras can only carry film loads of up to 200 feet. Perhaps the greatest advantage of these super heavy lift rigs is the ability to carry ultra high definition cinema cameras and lenses like the Red Epic, Scarlet, Arri Alexa and Phantom high speed cameras.